The following article by Jogyata Dallas is reprinted with the kind permission of the IndiaNZ Outlook newspaper.

Throughout our long history, humanity has always been guided and uplifted by the lives and deeds of our great teachers and leaders, the political greats like Mikhail Gorbachev and Nelson Mandela; the humanitarians like Mother Teresa; the pioneering visionaries like Thomas Jefferson. In the spiritual realms, over long millennia India has provided us with so many of the great sages and Teachers who continue to remind us of the highest and deepest truths about our existence, the life navigators and exemplars pointing the way. These are all world figures who tower above nationality and self-interest and whose very names come to embody values and principles that linger long after their earth life, inspiring us for centuries. In the realm of these immortals, the name of one of India’s most recent luminaries shines brightly, the late spiritual master and peace-server Sri Chinmoy.

In Sri Chinmoy’s birth place of Bengal, there is a saying “A moment with the Beloved and the river changes its course”. History has proven the truth of this, how encounters with remarkable people in different fields of human life have inspired revolutions, remarkable charity, epochal change, great undertakings. They believed in us, raised us up, saw in each of us something remarkable and noble and better than what we saw in ourselves. They awoke in us a sense of great purpose and we cast aside any sense of inadequacy, instead daring and dreaming of great deeds. They may not have been involved in politics, but effected political change; never gave advice, but brought forward from within us a new clarity about our way forward, a new intensity of purpose. The rivers of lives and nations indeed changed their courses, nudged towards a brighter future simply through the power of their encouragement and conviction, their dauntless courage and the personal examples they set. But inspiration can also manifest itself on the humble stage of our personal lives as well, in our attempts at self-improvement, tackling new challenges, finding the courage for some formidable undertaking. One such example is the recent brave effort of an Auckland athlete, Harita Davies, a member of the Sri Chinmoy Marathon team who was initially inspired after reading a book by Sri Chinmoy about the limitless potential of human beings. Harita is poised to become the first Kiwi woman to ever tackle and finish the longest certified footrace in history, the Self-Transcendence 3,100 Mile Race held annually in New York city. Described as “The Mount Everest of Ultramarathons” by the New York Times, the 21st annual event has runners circling around a half-mile city block in suburban Queens during the stifling heat and sudden lightning storms of the NY summer. The 52 day race began on the 18th of June and finished on the 8th of August – competitors have to maintain an average of 60 miles a day, over two marathons every day for almost eight weeks! The race starts at 6 a.m. every morning and the runners can continue as late as midnight when the course closes till dawn. Only six women have ever completed the 3100 mile distance in the previous twenty events, with only one other male New Zealander ever attempting the challenging epic journey. The race was founded in 1997 by the late Sri Chinmoy (1931-2007), who pioneered many long distance events and has been credited with reviving multi-day racing, once very popular in the 19th century. The Auckland marathon team he founded hosts New Zealand’s national 24 hour championship race, and over thirty national road races and marathons annually. Sri Chinmoy was a great believer in humanity’s potential – a philosophy he called ‘self-transcendence’ – and made headlines over twenty years ago when he predicted that the sub two-hour marathon mark would fall in the coming few decades. His prediction almost came true recently when Kenyan marathoner Eliud Kipchoge, gold-medalist at the Rio Olympics and the best marathoner in the world, stepped up to the starting line at the Autodromo Nazionale Monza race track in northern Italy and ran the fastest time ever recorded – 2 hours and 25 seconds! Many of the 3100 mile competitors describe the race as very much an inner journey as well, a test of mental strength, self-belief, the ability to endure through countless challenges. Harita comments: “Many of us go through life wondering about what we might have done if we had dared to attempt something seemingly impossible and difficult. 3100 miles really frightened me, but I decided to venture into that frightening place and challenge myself and see what I could learn. It’s one of the best and happiest and most amazing experiences I have ever had”.

“Just to keep going is an incredible lesson for life, and not being deterred by obstacles. They make you stronger and really help you develop faith, confidence, patience, and perseverance, qualities that are so essential for life. I like Eleanor Roosevelts remark, that it’s better we aim too high and fall short of our goal, than to aim too low and achieve our goal, and always wonder at the end what might have been possible if we had dared to aim a little higher.”

“For me, 52 days of running is a spiritual journey more than anything, confronting in myself during the long hours of each day the frailty of the body, the stubborn resistances of the mind, wearing them down till only the trusting heart is left. Out on the road, everything is simple, everything else falls away. There is only the essence of life, only its ultimate purpose.”

An interview with Harita Davies on Day 27… 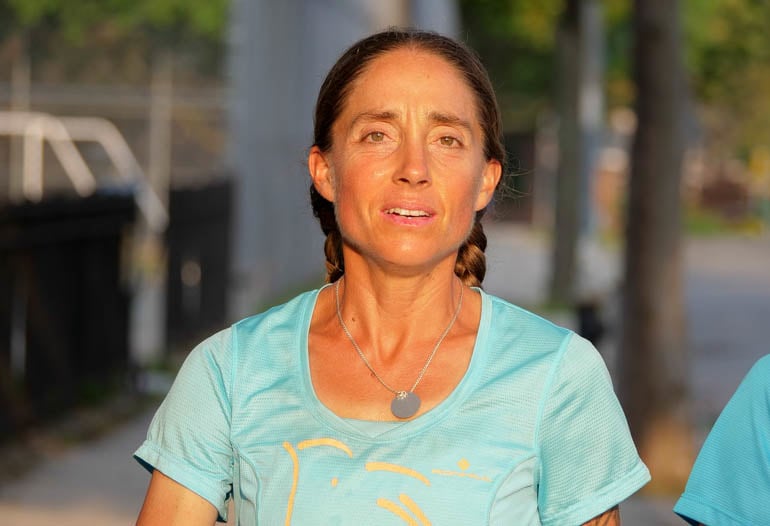