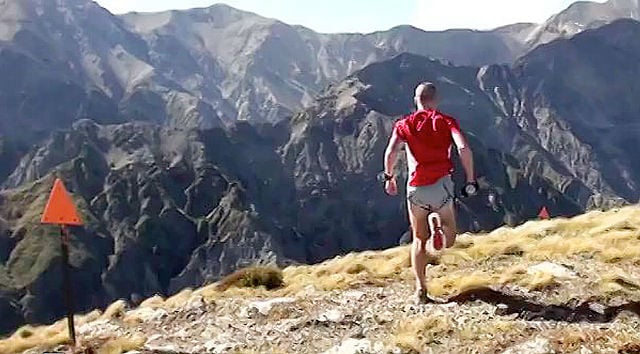 As a 14-year-old boy competing in the 800m event at national secondary schools level, and despite being one of the fastest boys there, Vajin missed out on a spot in the final by 0.02 of a second through a tactical misjudgement and becoming boxed in on the final lap. Subsequently – a decision he made as a performance-based athlete (as most are) – he gave up running. Today he is one of the most celebrated ultramarathon runners in New Zealand who is also recognised on the international circuit. So… how and why did that happen?

On Thursday 12th January 2017, Vajin Armstrong spoke about his meteoric running career at the Auckland Sri Chinmoy Centre, and the people who were lucky enough to attend this landmark talk came away with more than just an inspiration for running – he gave, more specifically, an inspiration for life.

Meeting Vajin was a surprise as a lot of really good athletes I have met have been hyped up and buzzing with a surplus of energy – this guy was calm, happy and focused, with a sort of inner intensity  in the air around him. Make no mistake, he is definitely highly motivated, but in a deceptively unassuming sort of way. This became more and more apparent as he spoke and shared some of his inner experiences, which gave rise to the subsequent choices he made about his life.

In his late teens – about 4 years after giving up running forever – Vajin was walking in a beautiful park in Christchurch very early one morning and had a life-changing spiritual experience that was such a powerful revelation that it formed the basis of his spiritual aspiration. As a result of this, he became a seeker and not long afterwards joined the Sri Chinmoy Centre, from which he was inspired to take up running again as part of his spiritual life. And he found he was really good at it.

At this time he also took up a plant-based diet, so as to facilitate his meditation practice, which helped to hone his spiritual focus, which he used in his running. As he manouevred his way through training programmes and races, he found that he enjoyed running more and more, given that Sri Chinmoy’s philosophy is one of self-transcendence: rather than trying to beat the world, his goal now was to compete against himself. He said that when the going got tough there were a couple of things he did at those gruelling times: (1) he used his meditation to focus on the ‘now’ – after all, he only had the present to work with, so he allowed thoughts of what happened yesterday/what was going to happen tomorrow, etc, to drop away so he was just focusing on what he was doing now ; and (2) he told himself, ‘You have chosen to be here and do this so are therefore presumably enjoying it’ and he would do what he called ‘change up his consciousness’ (like, telling his mind that this was fun, breathe out all pain, etc) and in this way he found enjoyment in what he was doing. With his new-found focus he enjoyed running so much that he found that his old distance of 800m was over too soon, and he started finding joy in longer distances. Soon the 10km, half-marathon, marathon distances fell away and he began running longer distances. There is a 47mile race in New York that Sri Chinmoy founded, and he entered it one day, and enjoyed it so much that there was no looking back! Longer races were quite often off-road, so he took up trail running and found he loved running along tracks in the bush where he felt at one with nature. It was about this time that he entered the Kepler Challenge for the first time. This is a mountainous 60km track that usually takes 3 or 4 days to tramp. In the race he was cruising along having a good time (his goal was to become familiar with the track for future challenges) and just happened to pass everyone – he was in the lead with about 5km to go, and then went for it and won! Interestingly, he said that that was the hardest part – previously he had just been enjoying the run but when he passed the leader (which he hadn’t expected) he found himself worrying about where the people behind him were, etc, and his mind noticed the pain, the distance and all of the minutiae that saps your energy during a run. So he had to forcibly bring his meditation practice to the fore, not worry about anything, and just run.

That was just the beginning. His use of meditation to facilitate his running developed further during the Big River 50 mile race in the USA when he found himself in the lead, and to distract his mind from painful minutiae again, he decided to focus on a spiritual quality instead, and starting chanting ‘gratitude’. He flew through the rest of the race and was the first non-American ever to win that race. Since then he says there are three main qualities he focuses on:

He went further to explain that running is not a selfish thing that you are doing for yourself – it is an experience to be shared and in that way is expanded. If you share your experience of training and racing with all of your dear ones, you expand the experience for them as well as yourself. For instance, the international meditation community of Sri Chinmoy Centres around the world is very much a global family of seekers – and the Swiss Centre members all got behind Vajin when he ran the Swiss Alpine Marathon in 2016 (78km of trail running in the Swiss Alps) – and were ecstatic when he won it!

What struck me as being remarkable is that Vajin is not merely doing meditation as something to calm down and provide ‘warm fuzzies’ – to him it is an active, dynamic and practical tool that  is an integral part of his lifestyle, happiness, and truly part of who he is. And the way he has utilised and revealed the results of his own meditation and understandings in his life and sport has definitely been effective!

His talk was breathtaking and I felt honoured to be there to witness it. To quote the woman who was sitting behind me (who – by her physique – was definitely a keen runner), and who breathed after Vajin’s closing words: “That was awesome.”